The following complaint letter was submitted to the ABC Audience and Consumer Affairs in response to a tweet by Ms Sophie McNeill, ABC’s Middle Eastern correspondent based in Jerusalem. Ms McNeill interviewed Dr Morad in Turkey. (See tweet above.)

To ABC Audience and Consumer Affairs

Ms Sophie McNeill presented a report on Lateline that included an interview with a man she introduced as Dr Mamoun Morad, a Syrian doctor who claimed to have been in the town of Khan Sheikhoun ‘on the day sarin gas was dropped on the Syrian town …’. I wish to submit a more detailed complaint in response to this report. In the meantime, this complaint is in regard to a tweet Ms McNeill posted on 2 May 2017 with a link to the Lateline program that included Dr Morad’s claims.

In her tweet, Ms McNeill writes, ‘The inspiring Dr Morad is an incredible witness to this alleged ‘crime against humanity’ – watch here …. #KhanSheikhoun’

The ABC Code of Practice requires ABC journalists to be impartial. There is nothing impartial about Ms McNeill’s expression of admiration for Dr Morad. Because Ms McNeill is an ABC Middle East correspondent, her reports on Syria are given prominence and credence. Hence, her personal esteem for an alleged witness can hold weight: it can prejudice ABC viewers who follow her on Twitter, so they accept without question Dr Morad’s claims; it can deter other journalists or commentators from seeking other points of view and expert analysis of Dr Morad’s witness; and it can quash discussion of Australia’s support for the US military action following the alleged chemical attack on Khan Sheikhoun. (Note: the US military strike killed 9 civilians, including 4 children.)

In making this complaint I would like to draw your attention to the following:

1. If Dr Morad was in charge of the medical response to the alleged sarin gas attack in Khan Sheikhoun as he alleged, can it be concluded he supports the ideology of those in control of the town, i.e a coalition of groups affiliated with Al-Qaeda? The fact that Dr Morad feels safe to go to work in an area controlled by such groups should give cause to scrutinise his claims rather than praise him. In a case like this, ABC viewers would want the ABC to uphold its Code of Practice in a most stringent way, and so strictly forbid any expression of praise for someone who might support the ideology and violence of Islamist extremists.

2. Expert witnesses have challenged Dr Morad’s claims. For example, Professor Ted Postol at MIT has examined the evidence regarding the alleged chemical weapons attack and concluded that the munitions were not dropped from the air. Also, Dr Denis O’Brien, a US pharmacologist, has examined the video evidence of the victims and concluded that the symptoms they display strongly indicate they were not the victims of a sarin attack.

I trust ABC Audience and Consumer Affairs will understand the gravity of this matter.

The images below are screenshots of a video that was taken in a town in Idlib controlled by Jabhat al-Nusra, a group affiliated with Al-Qaeda. See Reuters report on the woman’s execution. (Jabhat al-Nusra has been rebranded and merged with other groups. See BBC article on the rebranding: Tahrir al-Sham: Al-Qaeda’s latest incarnation in Syria) 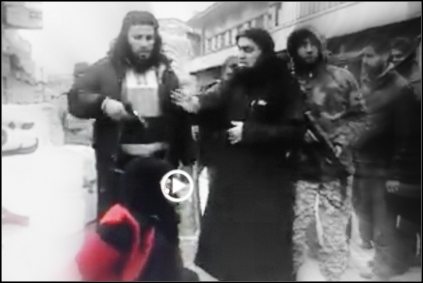